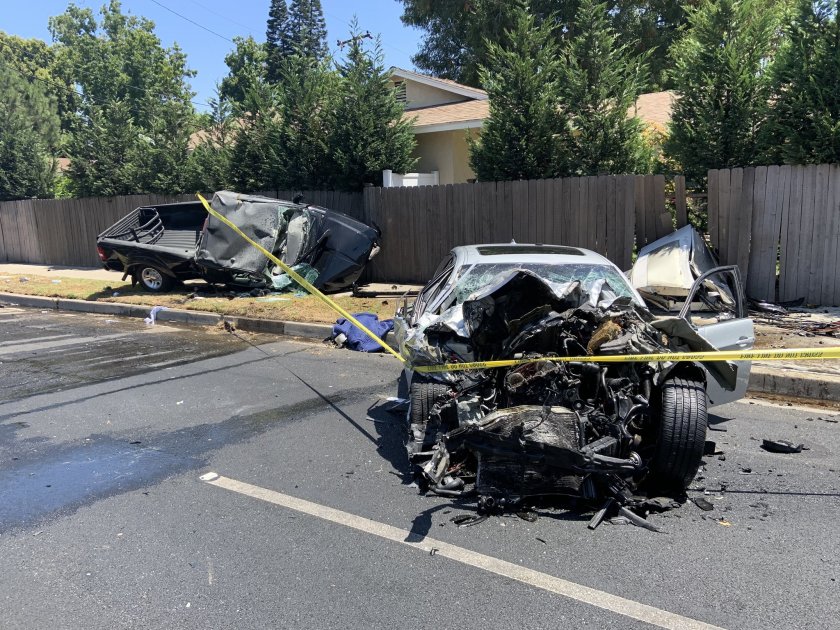 The fatal car accident occurred just before 11:45 a.m. at Bristol Street and Santa Clara Avenue. Eugene Harbrecht, 67, who worked at the OC Register and later the Southern California News Group for nearly four decades, died at a hospital.

The drivers of a BMW and Infinity were racing north on Bristol Street when the BMW slammed into Harbrecht ‘s Ford F-150 pickup truck as he was making a left turn on Santa Clara Avenue to southbound Bristol.

The pickup skidded 60 to 70 feet into a wall and caught fire.

Two residents dashed out of their nearby home to help pull the driver out of the wreckage as a police officer on scene helped extinguish the blaze.

“I right away knew it was a car accident, just based on the sound,” said witness Guillermo Velazquez. “I was told that it was due to potential speed racing, and that’s what makes it more frustrating, that it happened to someone innocent.”

Harbrecht was rushed to UC Irvine Medical Center, where he was pronounced dead. The Santa Ana resident had worked at The Orange County Register since 1984, most recently as the national and international news editor for the Southern California News Group.

The driver of the totaled BMW, identified as Louie Robert Villa, was also taken to a hospital with injuries of unknown severity, according to Bertagna, who said Villa was later arrested at the hospital for suspicion of felony vehicular manslaughter while intoxicated.

A witness provided police with license plate number of the Infinity and officers later arrested the driver, Ricardo Tolento Navarro of Santa Ana, and booked him at the Santa Ana jail for vehicular manslaughter.