Callahan & Blaine has an unparalleled history of record–breaking verdicts and settlements in diverse and wide-ranging areas of litigation, and is recognized nationally for winning the most complex and difficult cases. Among the record breaking results that Callahan & Blaine has achieved are the following:

In addition, Callahan & Blaine is frequently hired by large corporations to handle complex business litigation matters on the defense, especially for complex matters which require expert litigation and trial skills. In fact, Callahan recently obtained a 12-0 defense verdict after a two month jury trial for one of the largest technology companies in the world for a very high stakes litigation matter.

Callahan & Blaine is led by its managing partner Daniel J. Callahan. Dan Callahan is known and respected as one of the top trial lawyers in the United States. With respect to Dan’s honors and accomplishments, here is a partial bullet point list:

Callahan & Blaine also features numerous other highly successful trial attorneys, including Edward Susolik. Ed, who is head of Callahan & Blaine’s Insurance Department, specializes in complex business litigation, severe personal injury and the resolution of complex insurance disputes. He has been responsible for many multi-million dollar verdicts and settlements over the years. Ed has handled over 1000 bad faith lawsuits and disputes and has recovered over $750 million in insurance proceeds on behalf of his clients over the years.

Ed is a frequent speaker on insurance and litigation issues to lawyers, business groups and others. Ed is a member of the adjunct faculty at USC Law School, where he has teaches Insurance Law and Personal Injury law. 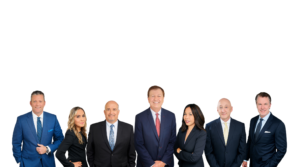